I have not posted in this blog since August of 2018 when my TransAm bike ride ended in Oregon after 4200 miles of pedaling.  After letting the experience marinate for the better part of two years, and with the sudden rise of the CovidWorld, it’s time!

What was learned from riding coast-to-coast is just now coming into focus.  It was not for nothing that I took a ride of such length and scope, having never done any self-contained bike touring before.  Yes, I put myself through this experience…an experience I called a “quest”;  but the lessons weren’t readily apparent at the end.  There was only the idea that I had taken on a big challenge and ended up doing it.  The more profound underlying lessons have taken time to emerge.  And perhaps the pandemic has served to focus the mind.  Please join me as I document the unfolding pandemic and integrate my learning from the ride in the posts that will follow.

Where do I start?  It’s the great pandemic of 2020.  Twenty-four days ago Barbara and I drove to a timeshare in Napa with plans to visit friends and family in nearby San Francisco.  We had heard about Covid-19 of course, but we felt like we’d be low risk to catch it since we were not getting on a plane or using public transportation. 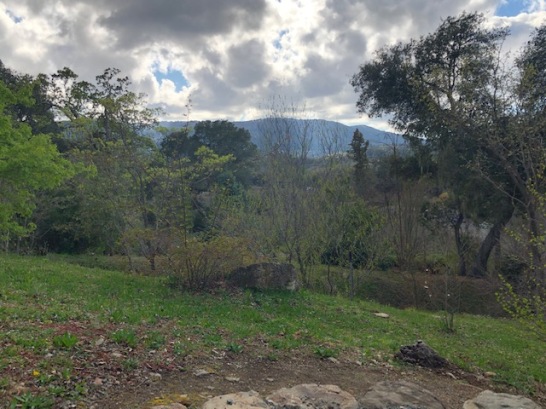 In Napa everything was wide open, no closures, wineries and restaurants filled, lots of people walking the downtown streets at night.  We joined them.  So much for delusions of “low risk”.  Napa was beautiful in the early spring, lush and green from plentiful rains and the rolling vineyards pruned bare.  I’d arrived with a cough that I’d had for weeks but it suddenly worsened.

One by one our planned visits got cancelled as a result of creeping Covid and my uncontrolled coughing.  Barbara suggested we head home and see a doctor.  We left the San Francisco Bay the same day a cruise ship with 24 Covid-positive passengers docked in Oakland after negotiating with authorities for days.  This is the ship Trump famously wanted to reject so they wouldn’t make his numbers look bad.

My doctor had just switched to telephone visits due to Covid precautions, so I had a phone appointment while driving home and started antibiotics the next day.  A few days later I was diagnosed with pneumonia, presumably the good ole-fashioned bacterial kind.  They DID test me for Covid-19 however, and it came back negative after five days.

The severity of the pandemic dawned on us in stages.  Six counties in San Francisco issued “shelter-in-place” orders just as we left. Within days, additional Bay area counties started issuing similar orders and a couple days after that the governor made the policy state wide.  Suddenly we were “sheltering in place” but taking liberties such as seeing the children and grandchildren.  Then the parks were closed, the trails were closed, the beaches were closed.  The WHO declared an official “pandemic” and the wild ride of CovidWorld suddenly began.

On cable TV, the hapless president was desperately trying everything in his playbook to deal with the pandemic: denial, spin, blame-shift, deflect, attack the media, roll out a conspiracy theory, bluster and bombast, alternative facts…everything that has worked for him throughout his life.  But Covid is having none of it.  The president stands naked, exposed as a malignant narcissist, unable to summon up genuine empathy, seemingly unable to connect with his heart, alone with nobody he can trust, and so fearful.  And totally incompetent as a crisis manager.

If CovidWorld becomes overwhelming, maybe there’s a chance the president will have a “come to Jesus” moment and be struck by the light of love.  Maybe we will witness the Scrooge storyline play out, with a tiny virus serving as Trump’s ghost.  Maybe he will appear on TV in tears, repenting, asking forgiveness, offering amends…a profoundly changed man.  Or maybe not.

The president is only a bit player in CovidWorld. Covid has brought the whole world to it’s knees. Rabbi asks,

“To what question is the coronavirus the answer?  The implication, of course, is that the virus has something to teach us — collectively and individually.”  Indeed.