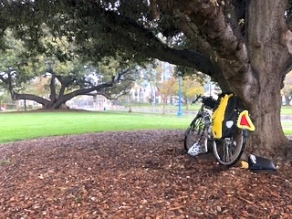 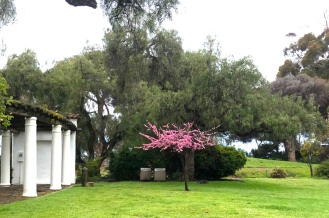 Up until yesterday I have savored cycling around town, mostly alone, seeing first hand what the shut-down looks like.  Truth is, it’s cyclist heaven out there:  few cars, no blasting exhaust, nice fresh air and fresh skies; everything lush and green after ample rains; spring in full swing.  And it’s out-of-the-house!!

It’s been so amazing to travel all the old familiar places and see them empty and closed.  If I’d been dropped from the sky to this scene, I’d guess that some kind of a neutron bomb had gone off…leaving all the property intact, all the flora and fauna intact, but erasing a huge percentage of the human population. The remaining people I see from my roving saddle, seem to be calm and deliberate…no obvious trauma from whatever event had taken away all the others.  The presence of face masks is the only clue readily noticeable.

Yesterday I cycled to the station and caught the Coaster (commuter train) downtown in the morning.  I shared the train car with three others who got off in quick succession and left the whole car to me for the rest of the trip.  I am riding my touring bike with a handlebar bag, a rear pannier and a safety triangle.  I don’t appear to be a recreational rider on this machine with fenders, and racks front and rear, more like and old guy going to the pharmacy for his medications!

There was a steady drizzle, and somewhere to shelter became the immediate priority, no easy task in a pandemic.  I settled in to a parking garage and kicked back against a pillar to write some field notes; but security had a different idea.  Noodling over to Balboa Park, I took cover under a giant Oak. The official-types manning a key entrance to the park close by kept giving me stink-eye glances, but they didn’t chase me away.

Since my almost daily rides for the last sixteen days, I have seen the lock-down become tighter and tighter.  Today there are people manning key locations to keep people away or shoo them along.  Nobody is lingering anywhere, everyone moving.  I packed a lunch but damn if I could even find a place to sit down and eat!  In a very remote corner of Mission Bay, a table had my name on it, and I spent a couple hours eating and writing letters.

But the ever-tightening closure is not looking as interesting now; it’s starting to feel creepy.  I wanted to get home and stop venturing out on the bike any more.

3 thoughts on “Local cycling in the Pandemic”